Warning: session_start() [function.session-start.php]: open(/var/cpanel/php/sessions/ea-php73/sess_nf99du8uitb4oab584a5o1c154ii466p, O_RDWR) failed: No such file or directory (2) in /home/ratamitu/www/public_html/wp-content/plugins/paid-memberships-pro/includes/sessions.php on line 21

Justina Lee Brown New Album Black & White Feeling
This album is a personal project for Justina and it focuses on her true Story and her Passion. All the new songs, lyrics and melodies belongs to Justina as a songwriter and composer. This album was arraged and produced by Nic Niedermann together with Justina. 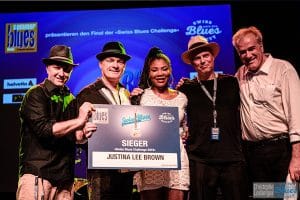 The 9° Swiss Blues Challenge Final took place for the 5th time during the Summerblues Festival on 28 June 2019 in Basel.

The winner of the Swiss Blues Challenge 2019 is Justina Lee Brown with her band (Nic Niedermann, Angelo Signore, Thom Wettstein and Robert Mark).

Justina Lee Brown and her band will represent Switzerland at the European Blues Challenge in Zaandam-Amsterdam, Holland (on 17/18 April 2020) and, if desired, at the International Blues Challenge, Memphis (28 January/1 February 2020).

Her voice is in the level of great Black Music of all times. She perform to inspires every audience with her Funky, Soul, Blues sound with Afro-fusion, simply world class!

She has won the “Women-in-Entertainment Award as “the Best African female voice” in London. The Nigerian native has sang her way up from the street child in Lagos through the European scene with her breath-taking skills.

Justina Lee Brown and Nic Niedermann composed and produced 12 songs together in a new project with the best team from Switzerland.
Every concert with the new songs was absolutely magical and a giant success, among others at the opening concert of the Blues Festival Baden Mai ’19

The magazine Jazz ‘n ‘more about the Lichtenstein Jazz Days ‘18:

“The highlight of this festival was Justina Lee Brown, who brought every visitor towards enthusiasm storm in a fully packed show on Saturday. She is an entertainer par excellence and one of the strongest newcomers of the blues and soul scene. With her unique voice, she gives each song its own touch and creates a thrilling atmosphere!”

Justina Lee Brown is recently living in Switzerland and she is ready to work with her huge voice and charisma and the fantastic songs for a long-term career.

The album “Black & White Feeling” comes out on Soundservice in September and will find a great resonance in press. Justina Lee Brown is also nominated as a finalist for this year’s Swiss Blues Challenge. So, there is plenty of publicity.

The “Black & White Feeling” tour, kicks off from September with her professional swiss band.
(You can book Justina with her full band, or as a trio and also as a duo).

We look forward to see you soon!